Singled Out is my entry for GMTK 2019 game jam.

I'm happy to say that it's finished, submitted, and I'm really pleased with how it turned out! Please check out my game and remember to rate it!

I managed to implement a difficulty ramping system today, and it went surprisingly smoothly. The game slowly increases the number of people in the crowd with each level. It also increases the likelihood that you'll see faces that share traits with the target, so it's harder to differentiate them. As you progress, the number of shared traits increases too.

I had to rewrite a lot of the face generation code to make this possible, because before today it didn't really care who had what features. It just generated some random faces and threw them out there. Now it keeps track of what the target looks like and makes sure the correct number of similarities are picked.

I also added a title screen, music, more sound effects, a High Score tracking system, and a lot more visual polish and variation for the faces.

One feature I didn't manage to implement was the 'extra hint' system. This would've allowed you to reveal one more piece of key information about the target (it was going to be 'skin colour' because I felt like this would really help to quickly find the target at a quick glance). Getting this extra hint would have incurred a penalty on your score.

However, it would have taken too long to create an interface for this system and raised a few new design questions... Would it be a clickable button? I don't have them anywhere else, so I'd need to code that functionality. Or maybe it would be a hotkey? That means you now need more than just one mouse button to play. And how would I present the player with information about how the penalty system works?

Anyway, I don't feel like the game suffers without this feature, but it could be good to add in a future revision.

One feature I do think the game would benefit from (suggested by @lindemannade) is a little reminder of who you shot at the end, especially when you screwed up. It would be really nice to be able to see where you went wrong and how you made a mistake. Once the person you shot disappears, it's hard to recall the details.

I'd also like to fix the pixel perfect rendering, and bake the faces down into one single texture so they look much cleaner. 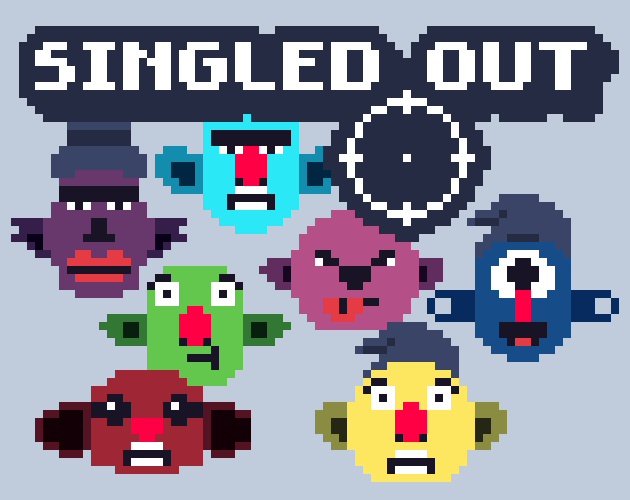 Anyway I'm going to take a much needed rest now. My wife played the game after I finished and seemed to really enjoy it so I'm counting that as a success. I hope you enjoy it too!

Please remember to rate my game jam submission and share it with a friend :)

Find your target in a crowd... ONLY ONE person matches the description.